It’s too hard to choose my favorite Gettysburg museum, so I’ve listed several. You don’t have to see all of them to have a nice time in Gettysburg. Choose which one suits your interests! 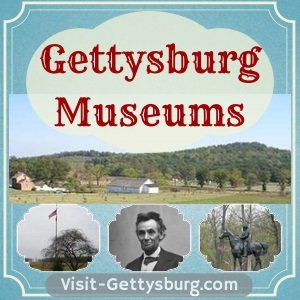 At the Jenny Wade House, you can see where the only woman and only civilian killed in battle died while making bread at her sister’s house. My grandmother talks about visiting this Gettysburg museum when she was a little girl, so things haven’t changed much since the morning of July 3, 1863. You can put your finger through the hole in the door where the bullet went through. Since Jenny was engaged when she died, they say that if a young woman puts her ring finger through the bullet hole, she’ll soon marry. On a tour, you also get to climb through the hole in the upstairs wall where the household members, carrying Jenny’s body, fled to the other half of the building then down into the basement. The basement is neat. You can really imagine the people hiding there. Some ghost tours take place in the Jenny Wade House at night.

Another favorite museum of mine is the Shriver House. The tour there really tells you the civilian experience and how women and children were affected by the battle. Tillie Pierce was a 15 year old neighbor who fled with them to the Weikert farm located between Big and Little Round Top. She wrote a diary book now regarded as one of the best eyewitness accounts of the battle. Anyway, the tour of the Shriver house (opens in a new window) takes you from up in the attic where Confederate sharpshooters were killed to down in the large basement that was designed to be a saloon. The saloon never opened because Mr. Shriver, a Union soldier, died as a prisoner of war in Georgia. If you are into handcrafts, pay attention to the gorgeous woven bedspreads and rugs in the bedrooms.

For another spot connected with battle history, tour Lee’s Headquarters. It’s located north of downtown out in the battlefields from day 1 of fighting. It’s unique among the Gettysburg museums because it’s surrounded by a hotel, the Quality Inn at General Lee’s Headquarters. It is small, but they have a variety of artifacts, including Reynold’s saddle where he was shot and killed, and several weapons. The space is arranged very nicely to accommodate several people without feeling crowded. I enjoyed reading about how Widow Thompson refused to cook Civil War food for the Confederates who invaded her property!

The Gettysburg National Park Service manages not only the national military park battlefield, but also the Eisenhower Farm historical site. The Eisenhower’s bought the farm intending to retire there. However, when President Ike was recovering from a heart attack in 1955, it became the place where he ran the nation. You can tour the house and the farm buildings. They do have some animals. To get to the Eisenhower Farm, park at the Gettysburg Visitor Center and take a shuttle.

A fun place is the Explore & More children’s museum. It’s designed for ages 3 to 8. There are seven rooms where kids can play and explore, including an 1860s room, art room, construction zone, nature area, and an exploration room with bubbles and magnets. Read more Gettysburg tourist attractions for children.

The David Wills House is now open as another museum about Lincoln so you can see where President Lincoln spent the night before he delivered his famous speech, the Gettysburg Address.

And of course, one of the best Gettysburg museums went through a transition in 2008. The park’s Battlefield Military Museum and Visitor Center moved to a new building. It’s a great American Civil War museum.

Another new and exciting museum is the Seminary Ridge Museum with a grand opening on the sesquicentennial 150 years after the Battle of Gettysburg began. I haven’t been there yet, but they have a website you can open in a new window.

Return from the Gettysburg Museum List to Gettysburg Tourist Attractions