The David Wills House is now open as a Lincoln museum. When President Abraham Lincoln visited Gettysburg, he spent the night there. I toured it in May 2010. 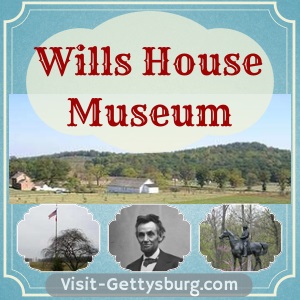 President Lincoln came to town by train. He arrived after dusk on November 18, 1863.

He spent the night in town to deliver his famous speech, the Gettysburg Address, at the dedication of the Soldier’s National Cemetery the next day on November 19.

This date is now celebrated and known as Remembrance Day.

David Wills was a prominent lawyer. The museum explains who he was and how he became involved in setting up the National Cemetery. There were no federal agencies to deal with the disaster.

The Pennsylvania governor visited Gettysburg on July 10, 1863 and gave Mr. Wills the important job of purchasing the graveyard land and organizing people to dig up the hastily buried bodies and identify them.

The bodies of those who died in battle had been scattered in graves all around the area.

The Wills House Lincoln Museum also has a nice miniature layout of the village of Gettysburg in 1863. There are several original documents on display.

With so many Northern governors, soldiers, foreign ministers, poets, judges, clergymen, and other notable Americans in attendance for Remembrance Day, there was a crowd of 15,000 on Cemetery Hill!

The house was overcrowded with 38 dinner guests that night. President Abraham Lincoln stayed in the upstairs master bedroom with windows viewing the town Square. You can tour it and look through those same windows.

The view is similar, but I did not like the feel of the room. The building was used as a shop for many years, so it does not feel very original. It’s very modern in the restoration. There is no attention to detail, but it is not intended to be a restored house; it is a museum.

There’s a nice little video that airs in the upstairs room and puts Lincoln in perspective, discussing the later Civil Rights movement and even bringing in Gandhi and other cultures.

Too bad our current administration does not believe in fundamental human rights such as choosing what foods to eat. Maybe they need to learn something about our history! Also see this poem by an Amish farmer about American rights (opens in a new window).

There are several other excellent Civil War and Lincoln museums around Gettysburg.