A full appreciation of the town is not possible without a basic understanding of the Gettysburg battle history and where events took place. The fighting lasted only three days in July of 1863 yet the effects have been felt ever since. 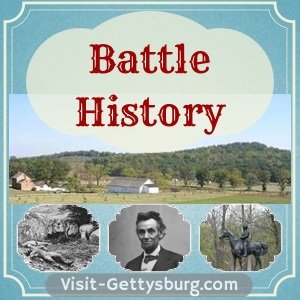 Picture the scene:
The thunderous cannons firing between wild Rebel yells and Yankee shouts. The glimpse of a tattered flag though thick smoke. The warm blood of men and horses spread across the ground. Of the 165,000 soldiers (75,000 Confederate and 90,000 Union), 11,000 men died or were mortally wounded during the battle. Another 29,000 wounded men survived.

It’s hard to imagine such a gruesome scene in the peaceful battlefields today, although you can come close in a reenactment. The movie Gettysburg

shows the battle at Gettysburg in realistic detail.

The battle was such a defining event, now known as the high water mark of the Civil War. Since it made this little country town famous, I will share the basics of what happened.

The Gettysburg Address Text
Read the Gettysburg address text to learn about when, where, and why it was given by Abraham Lincoln and its meaning and impact.

Gettysburg Genealogy Research
Picture what happened to your ancestors by researching Civil War genealogy and rosters of people in the Civil War. Connecting to the battle personally makes it come alive!

Here are some music samples and a Gettysburg Address audio clip: