Civil war genealogy is a fascinating part of any family tree. If you suspect that your ancestors fought in the Battle of Gettysburg, it is now easier than ever to do research on people in the Civil War. 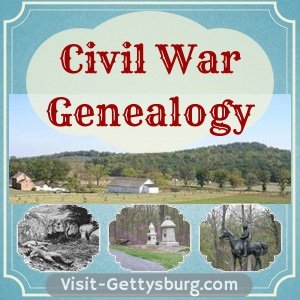 Connecting to the battle on a personal level will help you to picture the events and emotions of the day more clearly.

First, you need to decide who was alive during the US Civil War and where they were living.

You can easily trace your family tree back through the US census records. They list families, ages, and the county and state where the people were living.

The most recent year available is 1940, so talk to older living relatives to get the names to start, and then trace back each decade.

You will have to skip 1890 because the census records from that year were destroyed by a flooding accident.

An easier method is to use Ancestry. You can find a free version at some libraries, or subscribe and do it from the comfort of home.

Look for any young men who would have been the optimal age to go fight in the war. Older men went, too, depending on the situation at home and where they were living.

Now try the Civil War Genealogy Soldiers and Sailors System which is an online Civil War roster. When I last tried the soldier search, it only worked if you entered the last name only. Try a couple of spelling variations, too, incase the surname was misspelled.

I Have an Ancestor who Fought in the Civil War!

Be proud of your Civil War genealogy no matter which side your ancestor fought on or which battles he was in (or not in). These men were caught up in the events of the time, taking a stand for their values and willing to sacrifice themselves for their ideals.

You can still look for further evidence to see if your family was involved somehow by searching books and old newspaper records. Search Historical Newspaper Collections

Even if you don’t find the Gettysburg genealogy you hope to, you’re bound to learn something interesting.

Return from the Battle of Gettysburg Map to Gettysburg Battle History