All about Civil War Clothes

It’s common to see people walking the streets of Gettysburg in Civil War clothes anytime of year. Gettysburg is the Civil War reenactment capital for both the North and South. 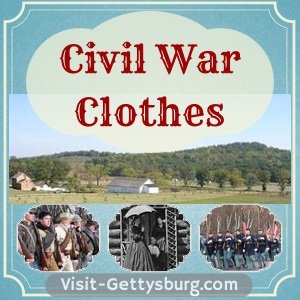 During some events, you may see more people in Civil War clothing than people wearing modern clothes!

Even if you’re just on a Gettysburg vacation, dressing like the people of the Civil War era can be fun and add a new level of respect and appreciation for daily life.

Whether you are looking for an American Civil War soldier uniform or a dress, you need to consider the social and economic status of the person you’re portraying and what outfit they would wear in that situation.

What did they wear in Gettysburg, July 1863?

The Details of Union Uniforms
Most people assume that all Civil War Union uniforms were navy blue, but that wasn’t the case. Some regiments wore outfits that were quite colorful and stylish.

Details about Confederate Uniforms
Men who served the South not only wore shades of grey, but also various shades of brown. Learn more about what “butternuts” wore for Confederate Civil War uniforms.

The Layers of Civil War Ladies Clothing
Best remembered as the hoop skirt era, Victorian ladies clothing involved several layers of garments that seem strange to us now. All Civil War dresses did not have hoops.

Hats and Hair Styles for Ladies
Learn about Civil War hats and how Victorian women wore their hair during the United States Civil War.

Civil War Clothes for Nurses
Many ordinary citizens in Gettysburg helped as Civil War nurses after the battle. Many buildings served as makeshift hospitals, and several homes took in wounded soldiers for a few months.

Clothing Choices for Civil War Children
The clothing of children of the Civil War depended on where they were living and their economic status. If you want to dress up in costume for a reenactment, you have many choices.

Return from Civil War Clothes to the Visit Gettysburg Home