There is a special day in Gettysburg every November called Remembrance Day. It commemorates Abraham Lincoln’s visit to Gettysburg to dedicate the National Cemetery. 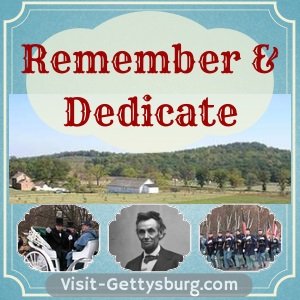 You may have heard of the little speech he gave at the event, a speech now known as the Gettysburg Address.

The official date of Remembrance Day is November 19. There is an annual ceremony at the National Cemetery on this date.

On the Saturday of that week there is always a parade. The very first one was held on November 19, 1863 when Lincoln and Union troops made the journey from the center of town to the cemetery.

On November 19, 1946, the Gettysburg Address anniversary date was formally designated as “Dedication Day” by a joint resolution of the U.S. Senate and House of Representatives.

I have been informed by the Sons of Union Veterns that “Remembrance Day” technically refers to honoring those who gave their lives in the war. The parade ends at the memorial of the last surviving Union soldier, Albert Woolson. The term “Dedication Day” refers to honoring the Gettysburg Address. These events have blended together over the years.

There were many more troops that I did not photograph! It is the main event for Civil War reenactors up and down the East Coast.

The parade started with a Lincoln reenactor in a carriage, then there were Union troops, followed by the Southern troops, then followed by groups from places in town, such as the Shriver House Museum. Some companies were led by generals on horseback. The men marched with the flag bearers and drummer boys and flutists in front. The women and some children followed in costume behind each unit they were associated with.

My favorite was the Union Colored Troops. They were singing "When Johnny Comes Marching Home." It was also really neat to see formation signals relayed back the line via bugle.

I enjoyed the Civil War parade; however, it was very cold! There were snow flurries while we were waiting. The event would have lasted an hour, but it actually took 20 minutes longer because they had to stop the parade and bring the ambulance in to take someone. If you go, you definitely need the following:

You also might want to bring a thermos with a hot drink or some of those heating patches. They're designed to be used on sore muscles, but they're also nice to pass around as finger warmers. Also, be prepared to walk. Finding a parking spot takes a little while, and it may be a ways from where you end up watching the parade. 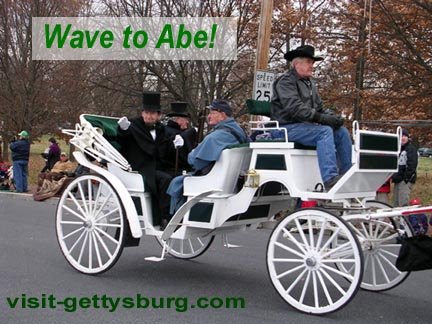 It's true what they say about there being as many people around in period clothing as modern clothing on Remembrance Day at Gettysburg. McDonald's was quite a sight inside!

Check the calendar of events to see what's coming up this month or look at the list of seasonal activities like Remembrance Day to plan your Gettysburg vacation.