Did you know that the Gettysburg address text was not written by Abraham Lincoln until the day before he arrived in Gettysburg? 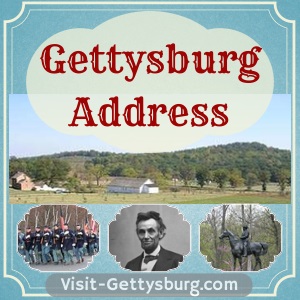 He also may have delivered some of the words a little differently in his speech than what he had written.

Lincoln arrived in Gettysburg by train the day before the event, spent the night at the Wills house on the town square instead of at a hotel, and delivered his short speech for dedication of the Solders’ National Cemetery on November 19, 1863.

He delivered the Gettysburg address text under a Honey Locust tree on Cemetery Ridge.

The town of Gettysburg commemorates the historic event every year on November 19th, now called Remembrance Day. It’s quite an event. A reenactor reads the Gettysburg address text in the cemetery. You can see more people walking the streets in historical costumes on that day than people wearing modern clothes!

Four score and seven years ago, our fathers brought forth, upon this continent, a new nation, conceived in liberty, and dedicated to the proposition that “all men are created equal.”

Now we are engaged in a great civil war, testing whether that nation, or any nation so conceived, and so dedicated, can long endure. We are met on a great battlefield of that war. We have come to dedicate a portion of it, as a final resting place for those who died here, that the nation might live. This we may, in all propriety do. But, in a larger sense, we can not dedicate — we can not consecrate — we can not hallow, this ground — The brave men, living and dead, who struggled here, have hallowed it, far above our poor power to add or detract. The world will little note, nor long remember what we say here; while it can never forget what they did here.

It is rather for us, the living, we here be dedicated to the great task remaining before us — that, from these honored dead we take increased devotion to that cause for which they here, gave the last full measure of devotion — that we here highly resolve these dead shall not have died in vain; that the nation, shall have a new birth of freedom, and that government of the people by the people for the people, shall not perish from the earth.

Lincoln’s speech puts the Civil War in perspective as a test of the success of the American Revolution. The nation founded on equality was in the midst of a war to determine whether such a nation could continue to exist. He said that they were gathered to formally dedicate ground hallowed by the men, American citizens, who died there, but his speech turned the event into a rededication of the living to the war effort to preserve a nation of freedom.

Impact of the Gettysburg Address

Before Lincoln gave the Gettysburg address, Edward Everett gave a long speech. He droned on for 2 hours comparing the Civil War soldiers to Greek gods. In comparison, Lincoln’s speech lasted only 2 minutes. Because it was very short compared to the other speaker, there was silence from the audience afterward. Some said it was because they were not sure that he was done, but others said that the crowd was in awe of what was said. His speech was brief, to the point, and poetic yet understandable. It is a classic piece with famous lines now recognized by people worldwide.

Locations of the Gettysburg Address Text

Lincoln wrote out 5 known copies of the address. Here are their locations:

Pictures of the Gettysburg Address Text

To view pictures of one of the Library of Congress handwritten copies online, see the Gettysburg address text at the National Archives website. (Opens in a new window.)