You don’t need to read an Abraham Lincoln biography to appreciate the man, but understanding some basic facts about Abraham Lincoln and his role in the Civil War makes a Gettysburg visit more enjoyable. 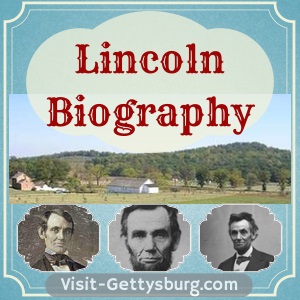 Even though he was commander in chief, President Lincoln was not in Gettysburg during the battle. He came on Remembrance Day to dedicate the National Cemetery and spent the night in the Wills house.

It was rare for the president to leave Washington, plus he had family pressure not to go because his son Tad was sick, but he believed it was important to be in Gettysburg for the dedication.

His personal servant accompanied him. The servant was William Johnson, a young African-American boy who had been with Lincoln since 1860.

Today you will find a life size statue of Lincoln in the downtown Gettysburg Square, standing next to the statue of a tourist and pointing at the room where he spent the night.

It is possible to see Lincoln reenactors walking on the street today. I ran into Lincoln in a hotel where he is a regular visitor!

Abe Lincoln before the Civil War 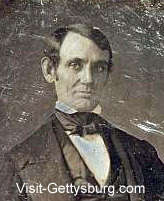 He was born on February 12, 1809, in a log cabin in Kentucky, as any Abraham Lincoln biography will tell you. He married Mary Todd Lincoln on November 4, 1842, They had four sons, but only one lived into adulthood. Robert, Willie, and Tad lived at the White House, but Willie died there in 1862 at age 12. It was very hard for President Lincoln to deal with such tragedy at home as well as handling a war between the states.

Lincoln was very tall at 6 foot, 4 inches, and made himself appear even taller by wearing a stovepipe hat. He was known for his love for animals.

He became an Illinois state legislator in 1834 and then became a country lawyer in 1837.

He served for Illinois in the U.S. House of Representatives from 1846-1848. Although he lost two runs for the U.S. Senate, the 1858 campaign featured highly publicized debates over slavery with Democrat Stephen A. Douglas. They faced each other again in the 1860 presidential election, but this time Lincoln won.

President Lincoln during the Civil War

When Lincoln was elected as the first Republican president in 1860, several southern states seceded from the union. He was inaugurated in March of 1861, and the first shots of the Civil War were fired in April.

He issued the Emancipation Proclamation to free the slaves on January 1, 1863, and on July 15, 1863, he wrote a proclamation to set aside a national day of Thanksgiving. He dedicated the National Cemetery and gave the Gettysburg Address on November 19, 1863. He was reelected as president in 1864.

The Assassination of Abraham Lincoln

Just after the war ended, the President and First Lady were attending a play at Ford’s Theatre in Washington, D.C. when John Wilkes Booth made his way into their balcony box seat and shot President Lincoln from behind. Booth leapt to the stage to escape and broke his leg, but he still managed to stay on the run for 12 days until he was tracked down and killed. 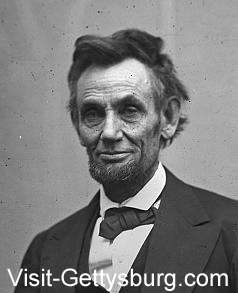 President Lincoln was taken across the road to the Petersen House and remained in a coma for 9 hours until he finally died on April 15, 1865.

A couple of years ago, I visited the museum located in the basement of Ford’s Theatre. There was a place where you could stand to compare yourself to his height, and I saw real blood stains on towels from the night of the assassination.

The Petersen house across the road is also open for tours and worth visiting. Lincoln’s hat is on display at the Smithsonian Museum, also located in Washington, D.C., which is 64 miles from Gettysburg.

Since Lincoln was the first assassinated president, there was a lot of mourning. When the funeral train carried his body back to Springfield, Illinois for burial, thousands of people lined the tracks to watch and pay respect.

His wife Mary Todd Lincoln never recovered from all of the tragic deaths in her family and eventually was declared insane. Her son Robert had her committed to an asylum in 1875.

There are many excellent children’s books about Lincoln. One Abraham Lincoln biography won the Newbery Award!

The Abraham Lincoln biography was a favorite subject for publishers to celebrate the bicentennial of his birthday in 2009, so there are many interesting choices for adults, too.

Return from the Abraham Lincoln Biography to Gettysburg Battle History