For such a significant site in the bloodiest war in the United States, the Gettysburg battlefields today are incredibly peaceful and picturesque. The Gettysburg National Military Park covers 5,700 acres! 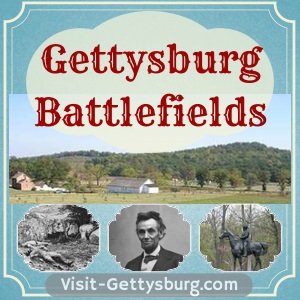 It’s hard to imagine the Civil War tactics of over 172,000 men gathering in and around this little town with a population of 2,400 to fight one of history’s greatest battles.

The events encompassed the whole countryside in approximately a 5 mile radius, not counting the East Cavalry site, so everything of significance is not within the park boundaries.

Battle veteran Dan Sickles was elected to Congress from New York in 1892 and introduced the bill that created Gettysburg National Military Park in 1895.

The battlefields of Gettysburg national park have been preserved for us as hallowed ground for us to explore and enjoy in memory of those who fought.

The battlefields contain more than 1,400 monuments, statues, and cannons, the most of any US historical battle location.

There are a variety of Gettysburg battlefield tours to choose from. The main battle locations are the most popular spots to visit. I will share my favorite spots and what makes them so special.

My Top Sites for Understanding the Gettysburg Battle

The Wheatfield Battle Scene
The Gettysburg Wheatfield is believed to be one of the most haunted Gettysburg sites because it is where so much bloodshed took place. The Irish Brigade is remembered there with a special stone monument.

Devils Den Rock Outcropping
A hot spot for fighting on July 2, 1863, Devils Den in Gettysburg is a favorite spot for tourists today. It's a must see visit to imagine some Civil War ghost stories.

Bloody Run Stream
The little stream known as Bloody Run at Gettysburg is also called Plum Run. It's a great spot to visit on the Gettysburg battlefields even though it runs through an area known as the Valley of Death.