It always feels cool and damp there between the rocks, no matter how hot the day is, so it’s a good place to sit and tell Civil War ghost stories.

The rock formation is overshadowed by Little Round Top just across the Valley of Death and Bloody Run. It’s a spot on your visit where you will have to get out and walk around to appreciate the full effect and why it was such an important location in the battle of Gettysburg.

The 4th New York Battery under Captain James Smith was positioned on top of the rocks of Devils Den in Gettysburg to form the extreme left of General Sickles’ advanced Third Corps line on July 2, 1863.

There was only enough room for four of the six cannons on top and no room for the ammunition chests, which had to be placed at the bottom of the rock formation on the east side. The other two guns were positioned on a knoll in the Valley of Death.

Smith hoped that the Confederates would attack on the west side through the Triangular Field, otherwise they would be trapped. But as the infantry brigades under Confederate Brigadier General Jerome Robertson and Brigadier General Henry L. Benning emerged across the way on Warfield Ridge and closed in for the Gettysburg battle, they attacked from three sides.

The 15th Georgia and the 1st Texas Infantry came through the Triangular Field. The fighting was at close range, and the repeated Confederate charges were fierce.

The Triangular Field is a favorite spot for ghost hunters. There have been many reports of cameras failing to work there and audio recordings picking up extra sounds perhaps of the ghosts of Gettysburg.

The 4th Maine under colonel Elijah Walker was positioned behind Smith in the Slaughter Pen, the portion of valley that separates Devils Den and Little Round Top. The 44th and 48th Alabama moved in to confront them.

Confederates were surprised to find so many boulders in the area of Devils Den in Gettysburg since they had been in areas with smoother fields and forests. The advance was difficult, but they managed to take Devils Den and Yankee survivors withdrew to Little Round Top as the 124th New York Infantry stalled the Rebels.

The 3rd Arkansas Infantry under General Robertson launched one more fierce assault and took control of the den with the 1st Texas charging up the Triangular Field in support behind them with a loud rebel yell, one of the wildest civil war sounds. 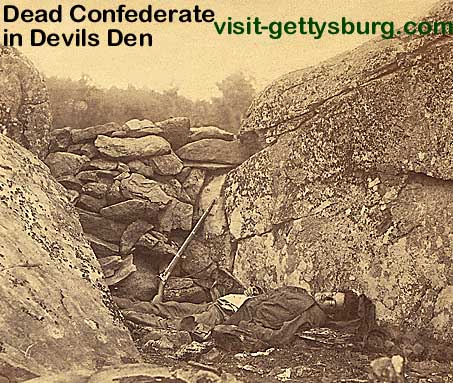 Confederate sharpshooters settled into the rocks of Devils Den and picked off Union men across the valley, above on Little Round Top. The Alabama and Texas Confederated tried to advance from boulder to boulder up the hill, but the Union held their ground.

Now that you appreciate Devils Den in Gettysburg, move up to Little Round Top where you can look down on it from the Union perspective.