Bloody Run at Gettysburg: A Plum in the Valley of Death

Is it called Bloody Run at Gettysburg or Plum Run? As the poem goes, “A rose by any other name would smell the same.” 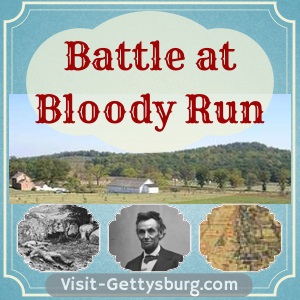 The official name of the creek running through the Valley of Death between Devils Den and Little Round Top is Plum Run, but it gained a second name after the slow stream ran red with the blood of fallen soldiers for a few hours in July 1863.

With the rain on July 4, 1863, it overflowed the banks and drowned some wounded men who hadn’t been collected yet, reportedly all Civil War Confederates.

The valley was littered with so many bodies that it was over a week after the battle of Gettysburg ended before the fallen men could all be buried. 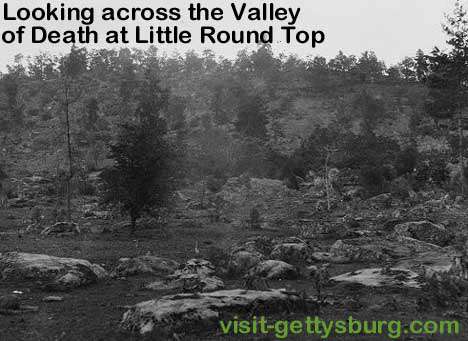 Nowadays, the auto road tour winds past the Peach Orchard, around Devil’s Den, and curves up through the Valley of Death to climb Little Round Top.

It’s my favorite part of the auto tour! It takes you right through the heart of the action, and turning from the large, imposing, barren rocks of Devil’s Den to cross the stream and rise up the grassy hill to the trees and magnificent view at the top is like rising from hell to heaven. It always makes me think of the scene in The Pilgrim’s Progress

book where Christian crosses the river to Mount Zion.

On a clear, warm, sunny day the Valley of Death is always a cheerful tourist spot with families walking along the stream of Bloody Run at Gettysburg or climbing boulders. You can really see how the scattered rocky outcroppings would have been used to dodge bullets.

Hot, weary Civil War soldiers gratefully drank from the cool waters, but that is not advised today due to possible contaminants and parasites.

The area directly between Devil’s Den and the Round Tops is nicknamed “The Slaughter Pen” because it was the scene of such intense fighting and high casualties. The 2nd US sharpshooters were stationed behind a stone wall at the base of the hill until they were chased out by the 4th and 5th Texas. To read more details about the fighting around Bloody Run, see Devils Den and Little Round Top. 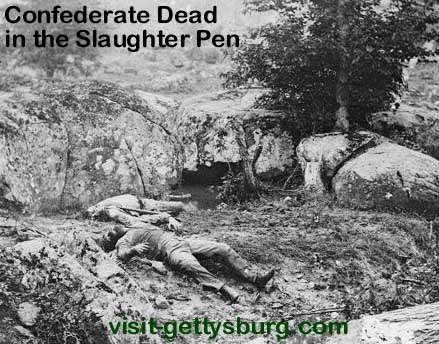