One of the bloodiest battle sites in the United States is the Gettysburg Wheatfield. The 19 acre field of wheat changed hands between the North and South six times. 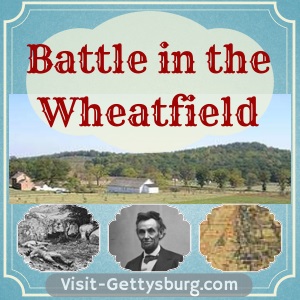 Veterans compared it to a whirlpool. Swept up in the intense fighting, over 6,000 men were killed, wounded, or captured in the field and surrounding woods.

It’s now a hot spot for ghost hunters because control of the Gettysburg Wheatfield went back and forth so many times and led to so much carnage.

There are many reports of cameras and other recording devices failing in this field while trying to photograph Gettysburg ghosts.

On the afternoon of July 2, 1863, Confederate Brigadier General George Anderson led his Georgia brigade through the woods to the south to a confrontation with Union Brigadier General Regis deTrobriand’s regiments who were stationed behind a stone wall on that end of the field.

As the battle of Gettysburg dragged on and ammunition ran out, Anderson maneuvered his soldiers directly in front of the Union troops to conserve ammunition. DeTrobriand’s 17th Maine Infantry under the leadership of General David Birney also used up their bullets and finally retreated, as Anderson’s men jumped over the wall.

Suddenly, General Birney ordered the 17th Maine to about face and do a bayonet charge! The counterattack pushed back Anderson’s men as Union reinforcements arrived.

A brigade of South Carolina soldiers under General Joseph B. Kershaw crossed the Rose Farm and attacked Union troops on a small rocky knoll that borders the west side of the field.

There’s an online archive where you can read Kershaw’s eyewitness account of the horrific scene on the Gettysburg Wheatfield. The journal entry opens in a new window.

The Union Irish Brigade arrived to push the Confederates off the knoll. Kershaw renewed his attack with reinforcements from another Georgia brigade under Brigadier General Paul Semmes. A Union counterattack by a brigade under Colonel John Brooke joined the fight, and Semmes was mortally wounded.

With bayonets, the Confederates were forced back to the Rose Farm orchards south of the house. Union forces began to withdraw from the Gettysburg Wheatfield under continued Rebel assaults.

The fighting was hand to hand for awhile and very intense. Take one of the Gettysburg ghost tours to learn more about the ghosts of Gettysburg and the Wheatfield.

The South Carolina Monument stands on Warfield Ridge where General Kershaw’s soldiers waited before the attack on the Rose Farm.

One of the most interesting monuments on the Gettysburg battlefield is the Irish Brigade Cross in the woods by the Wheatfield. The cross has a very intricate appearance, and looks like it belongs in a Catholic church.

An Irish wolfhound dog lies at the foot of the cross as a symbol of Irish loyalty. This monument by sculptor Rudolph O’Donovan was dedicated in 1888.