Civil War bonnets and hats were not just decorative accessories. It was important for Victorian ladies to keep a fair complexion — quite the opposite of our tanning lotion now! 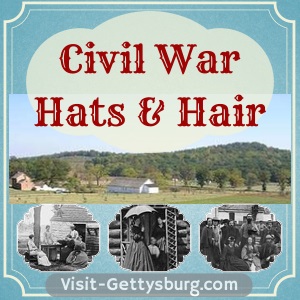 During the United States Civil War hats were required for ladies in church. Some conservative groups believed in head covering at all times.

Victorian women wore their hair up; little girls wore it all down in curls.

You find references in Louisa May Alcott’s books

to the special time when girls first turn up their hair.

Teenagers often wore their hair with the front half up and curls in back, since they were halfway between childhood and womanhood.

The standard Civil War hair arrangement for grown women was a straight part with the hair combed over the ears and secured into a chignon or bun in the back.

Sometimes women covered the bun with a lace net called a snood. The snood could be tied tightly around the hair like a little bag or tied wide around the back of the head but not extending forward past the ears.

Bangs, known as fringe, were not popular until the 1880s.

Hats or bonnets were part of a complete Civil War outfit for women that consisted of several layers.