The Confederate Civil War uniforms were anything but uniform in color and style since they were homemade and dyed by different methods. 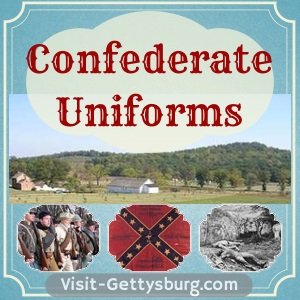 For uniforms of the Civil war, officers and some Conferederate soldiers wore grey, but the majority wore mixed shades of brown and khaki, earning crazy rebels the nickname “butternuts” due to the light brown color.

Remember, cotton was a southern product; however, the factories that produced lots of things like cloth and shoes were located in the North.

Southern made shoes wore out quickly with the hundreds of miles of marching, and they were difficult to replace.

Legend has it that the Battle of Gettysburg started because Confederates first went into town seeking shoes.

Confederate soldiers carried less equipment than Union soldiers. Blanket rolls, consisting of belongings rolled up in a blanket that was tied over the shoulder, were more common than knapsacks.

Southerners were also more likely to carry equipment captured from Union soldiers, and they took shoes and other clothing from Union dead after some battles. Therefore, Conferderate uniforms were heavily influenced by Union uniforms, although they favored the wide brimmed slouch hat over the visored kepi.

Taking Civil War clothes from wounded on the other side turned out to be dangerous. Some soldiers were mistaken for the enemy and shot by friends on their own side. It worked the other way, too: They could sneak up on the enemy in disguise.