Standard Civil War Union uniforms were made of wool and featured a dark blue shirt with four brass buttons. 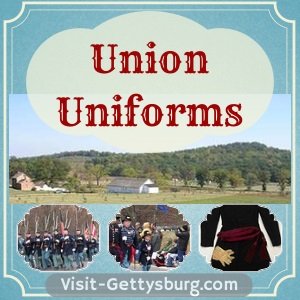 The high-quality wool was warm in winter but itchy and hot in the heat of summer. Many men hated the itchy wool army issue shirt, so they wore cotton shirts and underwear from home.

Cotton was a southern product, so it was more scarce during the war.

The Civil War soldier uniform pants were also dyed dark blue until 1862 when pants were dyed a lighter shade more like sky blue.

The pants were held up with suspenders, and leather shoes called brogans laced up over the ankle.

For extra protection to keep legs dry, they often wore gaiters over their shoes.

The forage cap, made of stiff wool that looked like a round circle towards the front of the head over a leather visor, was also most common. A symbol on the top of the hat in the circle designated which regiment the men belonged to.

Civil War Union uniforms for calvary men were similar except they wore high boots for riding and a wider hat.

Infantrymen carried muzzle-loader guns. Over his left shoulder, a soldier carried a leather cartridge box with ammunition. Over the right shoulder, he carried a pouch of food and a canteen of water or coffee.

Extra clothing and other personal items such as things used for shaving were carried by Civil War Union soldiers in a knapsack or rolled in a blanket.

Weapons in the Civil War

Cavalrymen carried Sharps single-shot breechloading carbines. They could fire twice as fast with 4 or 6 per minute.

Did you know that the Union Sharpshooter uniforms were forest green? This helped them to camouflage.

There were also regiments that chose unique elements for their Civil War Union uniforms as something to make them stand out as a group.

Zouave uniforms featured red knickers and a fez hat. They were modeled after outfits worn by the French to fight the Algerians in Africa in the 1830s.

The Iron Brigade was first known as the black hats due to their distinctive Hardee hats with the black feather.

If you would like to see some Smithsonian photos of Civil War Union uniforms, click to open the website in a new window then hit the small right pointing arrow above the photo to see more.