The Role of Civil War Nurses

Any woman willing to help in Gettysburg joined the ranks of Civil War nurses. Almost every downtown building was used as a temporary Civil War hospital. Many homes took in wounded soldiers for a few months until they were nursed back to health. 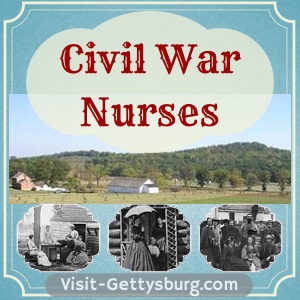 Civil War medicines were crude and scarce, and there were a lot of Civil War diseases caused by the stress and poor diet rations.

Unfortunately, many of the Army surgeons and nurses marched out of Gettysburg with the remaining troops on July 4, 1863, so the town was left to struggle with the aftermath and care for wounded on its own until more help arrived.

Head Nurse for the Union

Dorothea Dix from Maine was in charge of Northern female nurses in the Federal Nurse Corps during the war. Her costume standards for Victorian women serving as nurses were strict:

No woman under thirty years need apply to serve in government hospitals. All nurses are required to be very plain-looking women. Their dresses must be brown or black with no curls, no jewelry, and no hoop skirts.

Victorian nurses in the Civil War served in field hospitals, comforted soldiers, and tried to take care of their basic needs. They brought food and water and were often asked to aid the men in writing home to their families.

Fortunately, most of the citizens called into nursing at Gettysburg did not meet Mrs. Dix's standards, and many soldier diaries and memoirs remark on how pleasant it was to finally see a pretty girl after being on the march with the army of men for so long.

How did nurses work in hoopskirts?

A Victorian woman that did farm work or any sort of labor did not wear hoops everyday. If you want to wear a hoopskirt for a reenactment, then dress like civilians unexpectedly caught in the area instead of dressing like professional Civil War nurses. As I mentioned before, many of the area women took on the role of nurse anyway as they allowed men to convalesce in their homes.