The Civil War rations that soldiers received as their daily allowance of food were often unappealing and unhealthy. 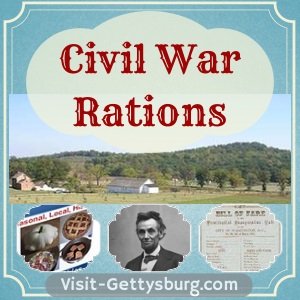 As is the case with major food manufacturers today, the government on both sides focused on filling the men rather than giving them energy to travel and fight. That objective often failed due to challenges with food distribution. Poor diet caused many Civil War diseases.

The Commissary Department purchased, stored, and supplied the food to soldiers.

Transportation and distribution networks were already established in the North, so the Union Army fared better than the Confederates.

Sometimes herds of cattle were driven along with the troops and slaughtered as needed, but they mainly received salted beef or pork, sometimes so spoiled that it made the men sick.

The Civil War rations were given out uncooked and then soldiers could prepare their food individually or gather into a small group called a mess to cook and share their rations.

If soldiers knew a march was coming up, they cooked everything and stored it in their haversack, a canvas bag.

Notice the hardtack, beans, and rice. The beans were dried white navy beans that had to be soaked overnight then cooked several hours. These starches all had little flavor, but they added bulk and were cheap for the Army to supply.

The sugar caused nutritional deficits, as described in the book Sugar Blues

The coffee beans were usually green and raw, so the men had to roast them in the fire. The Union Army supplied good coffee regularly since they were able to trade abroad, so Union soldiers often bartered coffee for tobacco from Southerners.

The Confederate Army started out issuing the same ration as the Union, but the rations were gradually reduced as the Civil War continued. Shortages due to poor food distribution were common.

Southerners were more likely to have bacon and cornmeal, and they often did not have coffee due to the shipping blockade. It had become popular as a beverage shortly before the war broke out. Some bartered tobacco for coffee from Northerners, or they tried making substitutes out of acorns or chicory.

The armies also supplied fresh vegetables (sometimes fresh carrots, onions, turnips and potatoes), dried fruit, and dried vegetables as part of the ration when they were available. Men also foraged and scavenged the countryside for fresh food at times.

Many also received supplements mailed from their family, or they could buy foods from sulters who followed the troops selling pickles, cheese, sardines, cakes, candies, beer, and whisky, even though the troops were forbidden to drink alcohol.

Soldiers likely prepared their Civil War rations similar to they way they ate at home and used cooking techniques modified for an open fire and limited supplies.

They were made of baked dough cut into squares or rectangles with holes like soda crackers to speed the baking time.

The hardtack became even harder as it aged over the months, so the men had to soften it with coffee, water, or soup, or fry it in bacon grease. It was often infested with weevils, a small insect, sometimes the only source of protein during shortages!

Use a pastry cutter

to mix the butter, flour, and salt. Add enough water to make a stiff batter, knead several times, then use your fingers to spread the dough out flat to a thickness of 1/2 inch on a non-greased cookie sheet. Bake for 30 minutes at 400° F. Remove from oven and turn the dough over. Cut the sheet of dough into 3 inch squares, and use a fork to punch four rows of holes, four holes per row into each square. Return them to the oven and bake for another 30 minutes. Turn the oven off and keep the door closed, leaving the hardtack inside until cool. Let it age at least 2 weeks before eating it. For an authentic flavor, wait a few months and for some weevils to take up residence!

I found that after a half hour of baking the biscuit was already too hard to cut or poke holes in without significant tearing. I would suggest the recipe be edited so that the cutting and poking is done before going into the oven, or perhaps after 15 minutes of baking. ~ Perry R.

You may be sticking your tongue out in disgust, but Civil War diseases would’ve been much worse without the vitamins A and D provided by the lard and weevils.

Union soldiers had a favorite dish called “skillygallee” which was salted pork fried with hardtack crumbled into the mixture.

The Confederate version, called “coosh”, was bacon cooked in a frying pan with some water and corn meal or crushed hardtack added to make a thick, brown gravy similar in consistency to oatmeal. Cornbread mush and leftover fried mush would have been similar favorite dishes for Southerners at home.