I have a passion for traditional food preparation, so I love to study Civil War recipes and ingredients. 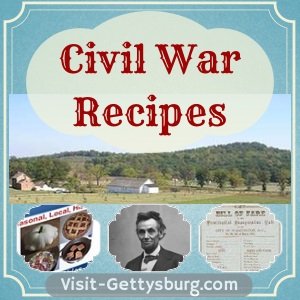 I have learned a lot about traditional foods through The Weston A. Price Foundation®. I now make nearly all of my own food from scratch.

Food preparation is not as hard as it was for our ancestors now that we have indoor running water and electric ovens.

In October 1863, President Abraham Lincoln declared Thanksgiving as a holiday that should be celebrated on the last Thursday in November.

The same was repeated at Christmas, as the families were able. It was much better than their usual diet! See Civil War hardtack recipes here.

Food prices rose in the South starting in the summer of 1861, and there were food shortages from 1862 onward, especially in towns and near the front lines.

It became increasingly harder for farmers to find enough laborers to plant and harvest the crops, and harder to transport food in the Civil War to where it was needed.

In April 1863, an angry mob consisting mainly of women rioted in the Confederate capital at Richmond, VA and demanded that the government should distribute bread.

Shortages were so bad that people could not afford meat. Those meats common before the Civil War, such as chicken, turkey, ham, and mutton, became an unaffordable luxury.

Some finally ran out of fresh milk as the family cow aged and was irreplaceable. However, a diet of cornbread, sorghum, and field peas lead to deficiency related diseases such as pellagra and communicable disease epidemics due to weakened immune systems.

Deficient diets do not necessarily bring immediate death but gruesome slowly progressing illnesses that leave the body defenseless. Anyone can see that this is the state of modern mainstream America. Why? Because we have forgotten what real food is.

I recommend that everyone read The Untold Story of Milk

and visit the Real Milk website. President Abraham Lincoln drank real milk, so why shouldn’t we? We need to demand access to vital traditional foods.

If we could have asked those suffering at home during the Civil War, a family cow would have been their number one wish during the shortages. They knew that it meant the difference between health and illness.

In order to serve you best on this popular topic, I’ve written Gettysburg Area Recipes. This is a resource you can use for your family’s health and pleasure as well as historical reenactments.

Learn how you can access to these homemade recipes that will bring you closer to an authentic Gettysburg experience!

by Sally Fallon. There’s a great cornbread recipe in there, a Southern favorite. This cookbook does not focus on Civil War recipes specifically, but it explains a lot of forgotten techniques about food preparation for maximum nutrition and old methods of food preservation such as lacto-fermentation.

by Sandor Katz is a great resource for how to use good bacteria and yeasts in the kitchen for Civil War food recipes like sauerkraut.

put together by the historic Hammond-Harwood House in Annapolis. It contains many old recipes. Unfortunately, some of the recipes have been updated to toxic modern ingredients, but there are still many originals, some from colonial times.

You can find Mrs. Beaton’s Book of Household Management first published in monthly parts from 1859 to 1861 available for free online as well as browse the historical American cookbooks in the online Feeding America project sponsored by Michigan State University (clicks will open in new windows). These will give you authentic Civil War recipes as people in the era read them.

If you make a book purchase through one of the above links, I recieve a few cents as an affiliate advertiser. These proceeds allow me to keep this website up and running, so I thank you for your support!

And I do personally use these books. They are high quality, just as I strive to keep this a high-quality website.

Here are some quick links to topics especially relvant for Civil War food recipes (links open in a new window):

You can also take a look at the Civil War recipes other visitors have shared here on the Visit Gettysburg website and rate them.