Flags of the Civil War

The various flags of the Civil War played an important role. A color guard marched into every battle and accompanied generals as they rode on horseback. 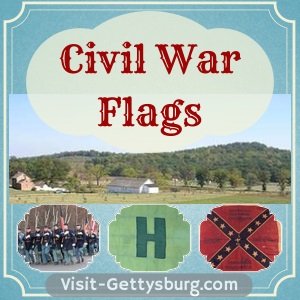 Battlefield communication was by a horseback rider messenger, and in the smoky hazy of gunpowder, Civil War flags helped the messengers and troops see where to go.

Unfortunately, the flag bearer was often an easy target, but others took up the flag to carry on. You’ll see them scrambling to raise the flag and rally the troops during battle scenes in movies. When the flag fell, the battle fell into chaos, and things looked bad for that side because they had lost their sense of battle formation and direction.

During the Civil War years, the Civil War Union flag always had 13 red and white stripes and featured white stars on a blue field, the Stars and Stripes. However, the arrangement of the stars could change, and often did as more states were added to the Union. The Union flags of the Civil War never removed stars as states seceded because they were fighting that the stars should be there, all united.

Each corps in the Union Army was assigned a distinctive badge shape. The corps usually contained 3 divisions that were represented by the corps shape with the division color:

Each Army branch in a division was assigned a basic flag color: 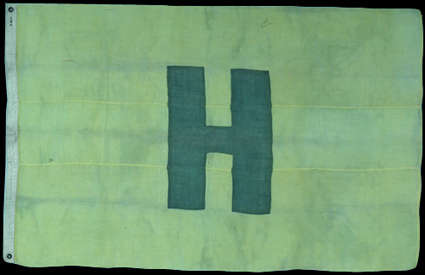 This is a flag from the Gettysburg National Military Park Collection. Flags like this were hung outside of a building to mark that it was being used as a hospital.

The basic regimental flags of the Civil War were solid blue with yellow fringe and decorated with an eagle and the federal shield. Stars above the eagle represented the number of states in the Union. The national motto, “E Pluribus Unum” (“In God We Trust”), was on a banner above the eagle or held in the eagle’s beak. Below, another banner contained the name and number of the regiment.

Brigades were the next smaller unit under a division and similar to a regiment. Brigade headquarters flags were typically a triangular shape and featured the Corps badge in the center.

Confederate flags had more variation. All regiments in Confederate General Hardee’s corps regiments were issued blue flags with a white circle or oval in the center to contain the seal. Other local area designs could vary from a floral wreath to a palmetto tree.

Most battle flags were modeled after the Virginia Stars and Bars we think of as the Confederate flag. The official flag of the Confederacy actually went through three stages of design as it became easier to distinguish on the battlefield. Also, as more states seceded, more stars were added.

The Bonnie Blue Flag is a nickname for the lone star flag of one white star on a blue background. It was first used in West Florida in 1810 and most famously used by the Republic of Texas from 1836 to 1839. The flag, symbolic of the independent spirit and statehood, reappeared among southerners during the Civil War and was the subject of a popular song by Harry Macarthy.

To see photos of authentic flags of the civil war, please visit the National Park Service’s online exhibit (opens in a new window). Below is the flag of the 5th Alabama Battalion which is being restored by the Artist Preservation Group. 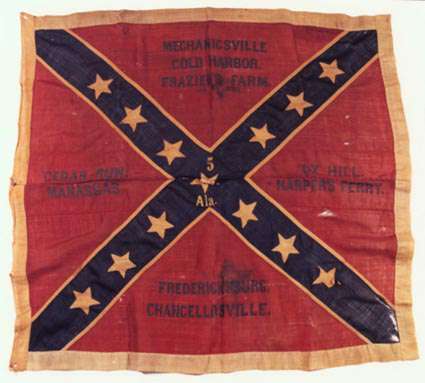 According to the Artist Preservation Group, the Colors of the 5th Alabama Battalion were captured at Picketts Charge on July 3, 1863. The flag came into the possesion of Joshua Chamberlain and was eventually returned to Alabama in 1943. Like most Civil War flags, this one lists battles in which the battalion participated.

Return from Flags of the Civil War to Gettysburg Battle History