The Eisenhower Farm was purchased by President Dwight D. Eisenhower as a retirement property before he considered running for office. While he served at the White House, it was used as a weekend getaway since it is only 8 minutes away from Camp David by helicopter. 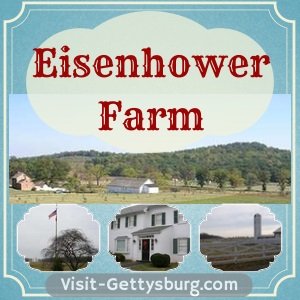 Ike and Mamie Eisenhower entertained many famous guests there. The most famous visit was between President Eisenhower and Nikita Khrushchev, leader of the USSR. At the height of the Cold War in 1959, he visited the farm and met the president’s grandchildren!

The Eisenhower’s children and grandchildren lived in the Gettysburg area. A relative of mine went to school with one of them. The family celebrated Christmas together at the farm, so the house is always decorated special during the month of December. There’s also an annual World War II weekend every September.

Anyway, I went the day after Christmas and took the photos you see in this video slideshow. Cameras are allowed, but no flash photography. Over time, flashes can fade things just like sunlight, and the unique wallpaper is in such great shape they don’t want anything to happen to it.

The Eisenhower Farm is a great place to visit, and it appeals to all ages and tastes. Ike had a skeet shooting range and golf putting green. Mamie Eisenhower loved pink, so she had a totally pink bathroom. There’s an old barn, greenhouse, and the patio where Ike himself barbequed the meat at picnics.

There’s even an old Secret Service office. Kids who visit the Eisenhower Farm can sign up for the Jr. Secret Service Agent program if they are ages 7-12.

They find clues to fill out a book then turn it in to receive a badge. Too bad there’s an age limit, or I would definately play, too!

Adults can have fun finding the cell phone signs where you dial to hear an explanation about outdoor sites. Read Going Home To Glory

a memoir by grandson David for more insight on what happened here.

If you go in the Reception Center, you’ll see an old black and white video interview with Eisenhower at the farm talking about restoring the soil and his efforts with gardening and livestock. He says,

When I die, I want to leave a piece of earth better than I
found it.

I love that quote. What would the world be like if we all tried to do that? He certainly succeeded.

To get to the Eisenhower Farm, you need to go to the Visitors Center and buy a ticket. A shuttle bus takes you to the site at the designated time. The driver will tell you lots of interesting facts and history about the things you pass on the way.

Return from the Eisenhower Farm to Gettysburg Tourist Attractions