I’m sure that nearly everyone has seen Civil War art portraying the Battle of Gettysburg. Since photographs of the day could not capture live action, many paintings and prints illustrate the dramatic events. 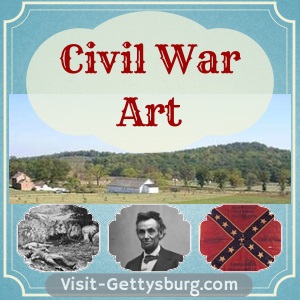 Civil War political cartoons were popular during that era. Some were comical, but others were very emotional or sentimental.

You can do research to look up actual Civil War cartoons and artwork in the US historical records online.

In the years after the Battle at Gettysburg, a couple of circular panoramic Civil War paintings were produced and toured the country at fairs.

The Gettysburg Cyclorama survives as an historic example of Civil War era artwork. It now remains in Gettysburg.

The best known movie is of course the Gettysburg movie

which was released in 1993. Based on the book The Killer Angels

by Michael Shaara, the plot follows Chamberlain and the 20th Maine and their heroic deeds on Little Round Top.

The movie producers received special permission to use the Gettysburg park for filming major scenes.

If you want to see some neat items from filming, visit the Tavern at the Farnsworth House Inn located on Baltimore Street.

There are several shops in downtown Gettysburg that specialize in Civil War prints and artifacts. Some even have artists (and authors like Michael Shaara) attend for special events.

When you buy a print or figurine, expect to pay more for a numbered limited edition. Also, be sure to store and display Gettysburg pictures properly, which means no direct sunlight.

Return from Civil War Art to Pictures of Gettysburg, PA