Imagine the lives of Civil War photographers, and you’ll appreciate their work even more. Photographers followed the troops, marching across the country and living in tents. 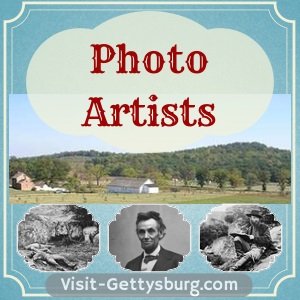 They witnessed the carnage of war firsthand and had to convey it to others who weren’t on the scene, such as the soldiers’ family members back at home.

Sketch artists tried to watch the battle without being killed. They came in after the actual fighting to record the scene and landscaping, such as this sketch taken at the Trosle Farm by the peach orchard.

Early cameras photographed very slowly, so there was too much movement to take Civil War photos during actual battles.

Images were recorded onto a specially treated glass plate. The glass was the negative from which tin and paper copies were made.

Newspaper printing presses did not have the technology to print photographs yet, so printed images had to come from sketches that were then carved into lithographs.

Below is a photo of Alfred R. Waud at Devils’ Den in Gettysburg shortly after the battle.

He was working on a sketch for Harper’s Weekly. He was paid by the paper to follow the Union troops and record major battles with his drawings. Please visit the The Civil War Historical Preservation Site to see historical Harper’s Weekly publications from the Civil War era. (Opens in a new window.) 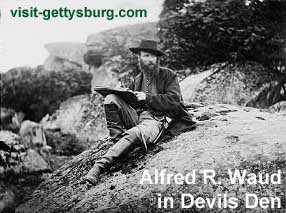 Newspaper correspondents tried to stay near the general’s headquarters. Written stories were sent in to the newspaper agency via telegraph or a courier on horseback. Sketches had to be mailed in by courier.

Matthew Brady was one of the photographers of the aftermath at Gettysburg. He can be seen in some of his Civil War photographs as a man in a straw hat.

He took the body of one Confederate soldier and posed him for several Battle of Gettysburg pictures in the Devils Den and Slaughter Pen area, dragging the body into position for each photo.

You can research Gettysburg photos by Brady and other Civil War photographers easily from your computer.

Return from Civil War Photographers to Pictures of Gettysburg, PA