If you think historical costumes are too boring, try some steampunk clothing

to add some fun to your Gettysburg vacation. 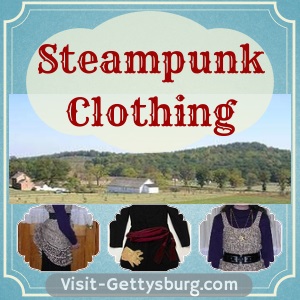 Gadgets and tools from a steampunk workshop can also be fun to use as you navigate the battlefields and historic sites.

Below is a photo of me in steampunk clothing at a friend’s costume party.

The emphasis was on fun rather than historical accuracy. Cool, huh?

Most people include goggles on their head as an accessory, but I didn’t have any, so I used a big punk belt and a large gold locket that looked Victorian yet similar to the gold bling that rappers wear.

I was aiming for the bustle era by tying my short dress up in the back over a long skirt.

The definition of steampunk is a style from a re-imagined historical period of the Industrial Age, imagining what life would have been like if modern technologies had been available but powered by steam.

or League of Extraordinary Gentlemen

RPG or the Arcanum

Steampunk fashion is increasing in popularity with modern clothing inspired by a Victorian style.

There are also technological tools designed to look neo-Victorian. They are not powered by steam, but they capture the flavor of the nineteenth century.

made from bamboo wood?

If you’re not in a historical reenactment or celebrating Remembrance Day, why not have a little fun and go steampunk?

Wear the trendy clothes and carry around a vintage-inspired GPS!