Your Brash and Wild Sister 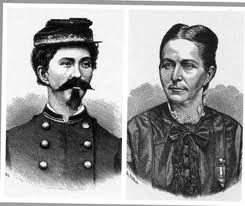 By now I think of each of you as brothers,
But now you know that I am not your brother,
Instead your brash and wild sister
Who managed to deceive all of you.

Don’t feel sorrow or embarrassment,
For I know that you all had your suspicions;
There are many more of us that you may suspect also
But are too nervous to call anyone out,
So many a times the truth is not revealed until the very end.

With our bound breasts and off-putting nature,
There is no way to truly know,
For we followed you,
And all showed the same amount of courage
That you did.

I have followed you at Antietam,
And when we demolished General E. Lee’s
Army, that we so much abhorred,
At Gettysburg side by side with you,
But yet, if you had known the truth earlier,
I should have been sent home.
I would have been laughed at,
All for my silly ambitions,
But where would you be now?
For I saved you–and you and you.
And I? I am what I am.

Because of that,
I am put off to the side,
Dismissed because I am not as strong,
Not so courageous or brave,
As all of you supposedly are.

Well, now you know the truth.
It is the end of this journey for me,
Seeing as I am a woman.
I have shown that I am courageous.
Without me, many of you would not be here.

In the time of battle,
I rose to the occasion,
And faced down death,
While many deserted you
And abandoned our cause.

As it is the end.
And I know that you have many problems to attend.
I ask but one thing.
In your head this thought must ring,
Every time you think of this war:
Think of me as a woman who has soared
Above and beyond all expectations
And all limitations.

As the story of our brash wild sister closes,
I can’t help but feel remorse,
For the death of a young woman fighting for something she believed in.
She went through so much trouble
Only to die in the end.