Gettysburg transportation is the same as most other East Coast small towns. Most small towns have absolutely nothing! 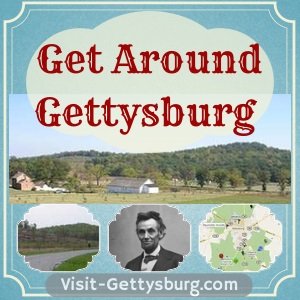 The local Gettysburg PA area used to have a convenient town trolley tour that ran a circuit through the heart of downtown attractions, but due to lack of funding, the fixed route was cut at the end of 2013.

The Freedom Transit trolley system ran on three circuts with a transfer center on North Carlisle Street. The trolleys were actually buses. The trolley tour was developed by the Adams County Transportation Authority over several years and launched in July 2009. The Gettysburg bus routes were:

The rural buses had more riders than the national average, but it wasn’t enough. Due to lack of funds, the Rabbit Transit system faced severe cuts and decided to eliminate service in Adams County at the end of 2013. Will another service appear to fill the public transportation void?

If you want to drive the Gettysburg battlefields yourself and need a car, there is an Enterprise Rent-a-Car.

Contact them about Gettysburg transportation by car rental and they’ll deliver a car to you (opens in a new window).

Bicycle and Other Methods

You can also rent bicycles in Gettysburg, if you’d rather travel that way. I heard that there’s a rental place north of town near the Eternal Light Peace Memorial, but I’ve never been there. I’ve only traveled by bus and car so far, but taking a tour of the battlefield on horse is on my wish list!

Return from Gettysburg Transportation to Where is Gettysburg?