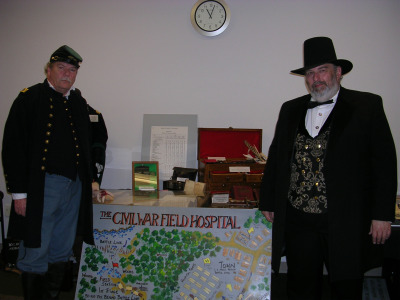 This photo of members of the Pipe Creek Civil War Round Table was taken at the Carroll County Public Library’s Finksburg branch on April 24, 2010. This room featured a large display about field hospitals and how surgery and medicine improved between the Revolutionary War and Civil War. The gentleman on the left is dressed in the uniform of a Union Captain Surgeon, while the gentleman on the right is wearing the clothing of a Victorian undertaker.