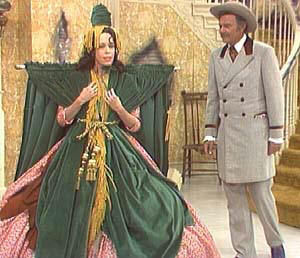 Here’s a photo of the famous Gone with the Wind

spoof that appeared on The Carol Burnett Show.

It was called “Went with the Wind” and when she appeared in the famous curtain dress, Carol’s character said, “I saw it in a window and couldn’t resist!” The costume even features the curtain rod across her shoulders and the tassle as a hat.

I haven’t seen anyone wearing this costume in Gettysburg, but I love this classic scene!